Television Writing is Best Learned from "Inside the Room"

This is a companion article to my earlier review of Cut to the Chase. Check that out here.

If you already know screenwriting but want to pursue writing for television specifically, helps and guides are very limited. Most screenwriting books address feature-length films or screenwriting in general, but Inside the Room: Writing Television with the Pros at UCLA Extension Writers’ Program by Linda Venis (editor) is targeted to those people who want to learn the art of television writing.

This book is not just one long book about writing for television, but rather it is broken into informative, specific subsections about what aspect of television writing you intend to tackle. The book has three sections:
Section One: Writing your One-Hour Television Drama Specs and Pilots
Section Two: Writing Your Half-Hour Television Comedy Specs and Pilots
Section Three: Being a Professional in the Television Business
At a glance, readers can see what applies to them and use the book as a helpful, immediate reference for their needs.

The Business Side of Writing

Inside the Room gives helpful writing instructions--information about outlining, creating a television story, what makes a sitcom funny, etc.--but it also addresses the business side of writing. An entire section of the book is dedicated to helping TV writers break into the company scene or get their TV script noticed. This section is practical and extremely helpful, with details about the television industry that are hard for anyone to learn who’s never experienced it firsthand.

The product details of Inside the Room as listed by Amazon are: 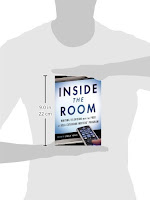 Click here to buy the book on Amazon, available in both Kindle and Paperback versions.

Here’s a sampling of some top reviews:

“The instructors at UCLA Extension are working professionals, they have their own takes on the industry and you know you are getting real, not jaded, opinions about the entertainment business.”
-          Stuart Beattie, writer/director, Pirates of the Caribbean: The Curse of the Black Pearl

“Inside the Room should be required reading for anyone embarking on or dreaming of a career in television. Like the classes I took at UCLA Extension when I was starting out, it demystifies the process of becoming a working television writer and tells you how to go about it. Most of all, it lets you know it’s possible.”
-          Carol Barbee, writer/producer, Touch, Hawaii Five-O, Jericho, and Judging Amy

“Aspiring television writers have found their bible in Inside the Room. It is an honest, insightful and incredibly accurate depiction of how the modern television system works. No book can guarantee success, but this one will get you as close as any can!”
-          Lee Hollin, director, drama development, CBS Television Studios

Some of the complaints for the book include:

There is some informational overlap in the sections handled by different authors. This is a natural danger of having a book written by multiple individuals rather than one.

“Aspiring writers might still want to check out a screenwriting book or two.”
-          Lauren, Goodreads reviewer

While there are screenwriting guides galore, there are very few that deal specifically with writing for television. If it’s something you want to pursue, Inside the Room is the book to start with.
Posted by Elizabeth Hughes at 11:52 AM