Sometimes in writing we have to deal with foreign languages--either existing or created by us. When we do, we need to make SURE we are doing our research. I can't stress it enough, so let me say it again: WE MUST RESEARCH. One more time, say it with me: I MUST RESEARCH. Even when creating your own language, you can't just spew letters out and go, "Look, Ma, look what I made!" Well, you can, but let me tell you right now people will catch you, and they will be displeased. Every language has rules and cadences and a specific ring that lets you know it is a language. Think about it, if someone walks by you speaking another language, even if you don't know it, you recognize it, right? I hear people speak Spanish all the time. No idea what they're saying, but I know it's Spanish, or Italian, or Korean, or whatever because it has a certain sound.

I made this mistake in the first fantasy manuscript I wrote with my own language. I thought I could just throw out whatever and it would work because it was a made up language. Guess what? The feedback I got was something like this:

"These words look NOTHING alike. None of them."

"I like the story, but their language is really unbelievable."

"You've never studied languages, have you?"

And they were completely spot on. When your language looks like: "Xuop uenns to nkto yu kam lau'la eknataliantbrlmdpkndiflasa?" there is something wrong. (Don't worry, my language didn't look THAT bad, haha, this is just an exaggerated example.)

My favorite example of an author who has this nailed is Richard Adams--the genius behind Watership Down. The book is about a group of rabbits who must find a new home when they realize their current one is about to be destroyed by humans. Richard Adams created a vocabulary for the rabbits based on how he thought they would genuinely speak if they could.

Oh my goodness I could keep going! (You know by now I'm long-winded, yes? Good! Continue to forgive me.) Back to Richard Adams. His language LOOKS like a language. More than that, it FITS the characters who are speaking it--if you can't picture a rabbit with its little wiggling nose saying, "Hrududu, hrududu," then you've never stared at a rabbit long enough.

Now, I'm not saying you need to be J.R.R.Tolkien or James Cameron or whoever created Klingon. If you want to make a complete working language, FANTASTIC, if not (like lazy old me), you still need to put in the time and imagination to make the words you do use believable. It makes a tremendous difference, believe me.

(This is self-explanatory for real languages, right? I hope we all understand we must spare ourselves from the embarassment of putting Arabic in our books when we know nothing about it and having someone who does know the language corner us and demand to know why this character called his girlfriend a lovely cow.)

Killing Violently and with Much Blood

HaVe I frEaKEd yoU oUt? 0_o GooooooOooOOood.
No, just kidding. Don't be freaked. What I am referring to here is your inner editor. When you first sit down to write, your inner editor perches on your shoulder like a little demon from the depths of that-place-of-which-we-do-not-speak, ready to shred your beloved, fragile little heart into ribbons the moment it ventures out onto the written page. If you try to shoo him away, he will stab you with his pitchfork. If you tell him to be gone, he will laugh in your face. If you force him out, he will force back in. The solution is to kill him. Violently, and with Much Blood. 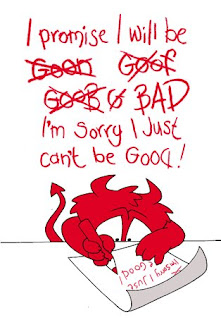 ﻿
DON'T PANIC! Before you begin screaming about the repercussions of such a rash act, let me remind you--the inner editor is a demon. Death is not permanent for him--it's just the action that takes him the longest to recover from. He will come grumbling and trudging back into your mind, dragging his pitchfork behind him, in due time, but in that lapse, you will have the time you need to get your feelings cemented into the page and your heart back safely within your chest. Then you can smile at him and gesture at the page, at which point his eyes will gain that demonic gleam and he will set to work happily tearing into the words. Now, your words are still lovely to you, and it will still hurt, but not in the crippling manner it would have if you had let him run wild to begin with. Besides, he doesn't hold grudges, believe me. After the chance to edit to his heart's content, he will forget all about the Much Blood, which will make him totally unsuspecting the next time you need to repeat the process. Do not jeapardize the importance of your first draft on his scathing input--his job is indeed helpful and important, but only when used later on, and it only hurts you both to act otherwise.

~ Lizzy
Current word count today: Today is a day of editing (funny, considering the topic)
Current song: Off My Mind by Henry Lau
Current quote: "'Smooth and Handsome' puts you in control and lets you have the hair you've always dreamed of!" ~ The really annoying commercial on YouTube that needs to die violently and with Much Blood.
Posted by Elizabeth Hughes at 7:00 AM 1 comment: