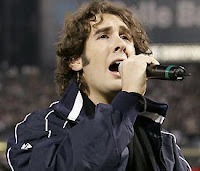 So, I've mentioned Josh Groban thrice already on my blog (including this post, he'll have appeared in over 1/3 of my posts, haha), so by now you must know that I'm a hopeless Grobanite, yes? Sweet! In that case, permit me, I will speak of him once more, because sometimes the best lessons you learn come from the most familiar things.
Rewind to about 10:00pm Saturday, August 13th, 2011. Where am I? Energy Solutions Arena, Salt Lake City, Utah. What am I doing there? Listening to the most wonderful performer I've ever heard. And learning.
To be honest, I was terrified to see Josh Groban perform live in concert, and I'll explain why. It wasn't that I thought his live singing would be bad--psh, zero chance of that. What I was worried about was his personality and his singing motivation and his feelings toward fans. Why? Because I've absolutely loved artists in the past (authors, singers, actors) only to find that who they actually were contrasted sharply with their work. Someone's work can be completely clean and wonderful, but you just can't enjoy it when you have a nasty aftertaste from that time when you saw them live or met them and found out they have awful morals, or their sense of humor is comprised of sex jokes, or they hate their own fans, or they don't care at all about the work they do and they're only in it for money or fame or because it's easy for them.
So when Josh Groban finished his opening songs and picked up the microphone to start talking for the first time, I sunk low enough in my chair I almost couldn't see him anymore at the same time I had every bit of my attention riveted on him. I think I was tense enough that if someone would have poked me, I would have screamed bloody murder and jumped about four feet in the air. Luckily, no one did, and my tension drained a bit more with every minute. Because it turned out I had nothing to worry about. 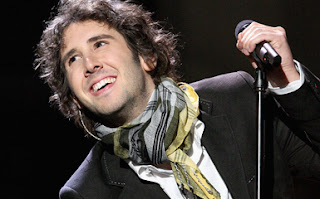 There's one thing in particular I want to talk about. The longer Josh Groban performed, the more obvious it became how much he loved singing. Not only did he never sing a half-hearted song, but he never sang a half-hearted note. Every song he performed completely surpassed its CD counterpart because he poured so much energy into every instant. I honestly don't even know where it all came from except that he just loves his craft. Even when he was pouring sweat and panting when he talked between songs, his performance and his smile never dropped. It left me with the very vivid feeling that Josh Groban is one of those artists who loves what he does so much that he would still do it even if he didn't have a single person listening. He performs for his fans, but he sings for himself.
Seeing that in action made me wonder about my own craft. I think it's easy to lose sight of the reason you do something, and I realized that I've been lax in my writing lately because I was feeling the lack of an audience. I even stopped reading just because it stung to see someone who'd succeeded in something I loved so much but was getting nowhere in. I had that mindset of, "If no one sees it, if I'm the only one who likes it, what's the point?"
The point is that if you only do something for the attention it gains, you're only hurting yourself. If I don't want to write because I don't have an audience, I will never have an audience, because I won't have anything to gain one with. And if I only write to get praise from other people, I'll only feel happy in the one or two minutes of conversation where someone compliments me. It won't make me lastingly happy, and it won't be my best work because it won't have my heart and energy in it. I need to write for myself just because I love writing and it's what I want to do, with or without an audience.

And I do, actually. I have folders upon folders of writing on my computer to prove it that have never been seen by anyone, they were just written because I wanted to pour myself out on paper. I just lost my grip on that, is all. But I got it back on Saturday, and hopefully someday I'll be able to meet Josh Groban so I can thank him for it, right? (Now you all know my secret "if you could do anything" wish, haha)
So here's my focus back and in full force. I want to be published for an audience, but I want to write for myself!
~ Lizzy
Current word count today: 769
Current song: Oceano by Josh Groban
Current quote: "Be yourself. Above all, let who you are, what you are, what you believe, shine through every sentence you write, every piece you finish." ~ John Jakes
Posted by Elizabeth Hughes at 8:54 PM 2 comments: